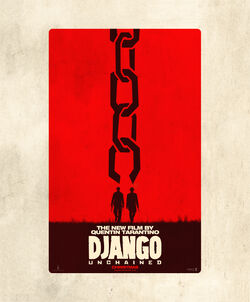 In the South two years before the Civil War, Django, a slave with a brutal history with his former owners, lands face-to-face with German-born bounty hunter Dr. King Schultz. Schultz frees Django, though the two men choose not to go their separate ways. Instead, Schultz seeks out the South’s most wanted criminals with Django by his side. Honing vital hunting skills, Django remains focused on one goal: finding and rescuing Broomhilda von Shaft, the wife he lost to the slave trade long ago.

Django and Schultz’s search ultimately leads them to Calvin Candie, the proprietor of “Candyland,” an infamous plantation where slaves are groomed by trainer Billy Crash to battle each other for sport. Exploring the compound under false pretenses, Django and Schultz arouse the suspicion of Stephen, Candie’s trusted house slave. If Django and Schultz are to escape with Broomhilda, they must choose between independence and solidarity, between sacrifice and survival…

The cover of Empire Magazine

The official poster for Argentina

Legal - This fansite is not affiliated with Quentin Tarantino, The Weinstein Company, or Columbia Pictures. All trademarks and copyrights belong to their respective owners, and are used here under the terms of Fair Use as defined in United States Copyright Doctrine. Django Unchained is a registered trademark of Mirmax Films, Inc.


Advertising - Advertising on Wikia is sold by Wikia Inc., and is not an endorsement of the products by Quentin Tarantino, The Weinstein Company, Columbia Pictures, UnchainedPedia or its volunteers. To report an inappropriate advertisement, please contact Wikia Inc. directly using the contact form. 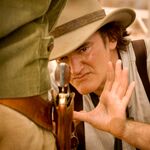 Quentin Jerome Tarantino is the writer and director of Django Unchained, his eighth movie. Born on March 27, 1963, in Knoxville, Tennessee, Tarantino dropped out of high school at the age of 15, attending instead full-time acting lessons at the James Best Theatre Company. At the age of 22, Tarantino worked at a video rental store Video Archives, where his fascination with films and cinema grew stronger. (more...)

See more at the Poll Archive


Refresh for a new quote

Community content is available under CC-BY-SA unless otherwise noted.
Advertisement